The first meeting of the above Committee concerned with this matter was held at the Oddfellows Hall on Monday evening when Major H L Newton, DSO, presided.  A collection committee was appointed and a district allocated to each collector.  The following sub-committee were chosen to estimate the appropriate cost, to select the site and to decide on the form of memorial:

Mr S A Lester as secretary.

It was mentioned that the number of fallen from the parish was 42 and already a donation of £20 had been promised.

Bodley & Hare (Gray’s Inn Square, London – 1907-1942) were chosen as the architects (specialists in War Memorials and ecclesiastical modifications).  The War Memorial was designed by Cecil Hare, executed by Bridgemans of Lichfield and dated as 1920, a Renaissance desig 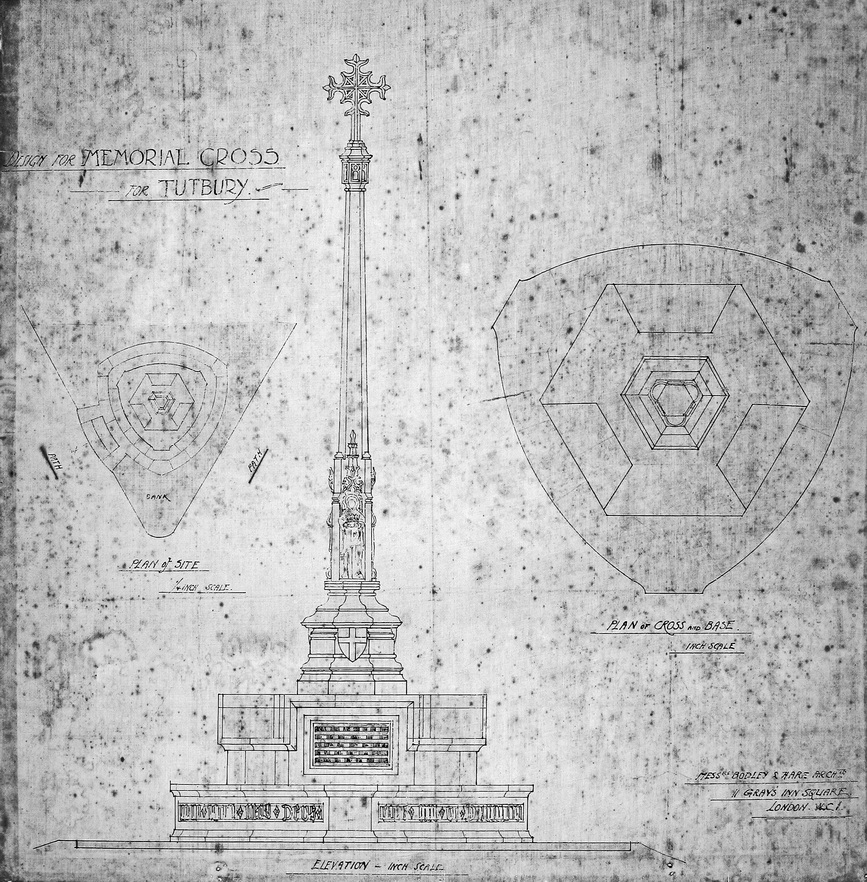 In the Lady Chapel there is a framed architectural drawing of the Memorial, resting on the floor, which will need conservation and protection.  Click on the picture right for a larger view (Ref: 20210210 1743A2)

The Burton Chronicle of 6th May 1920 recorded the dedication of the War Memorial:

A large congregation assembled at the Parish Church on Sunday[2] afternoon to witness the dedication of the war memorials.  The first part of the service was held in the church, where the Bishop of Stafford dedicated a beautiful stained glass window, erected in the south aisle, and a tablet containing the names of the forty-seven Tutbury men who fell in the great war.

The congregation then moved into the churchyard, where another large assembly had gathered on the southern side of the church to witness the dedication of the new parish memorial, a handsome stone cross beautifully carved in Hollington[3] stone by Messrs. Bridgeman and Son, of Lichfield to the design of Mesrts.  {sic}  Bodley and Hare of London.  Amongst those waiting were a large company of ex-soldiers, members, of the local branch of N.F.D and D.S. and S.[4] who were in charge of Captain B. Newton; members of the parish council; the police; the scholars and teachers of the Wesleyan S.S.

The ex-Service men had paraded from the town to the church, and had formed up on the bacv {sic} ground of the site, making a most impressive scene.  Preceding the Bishop from the church were the choir, the churchwardens (Messrs. W.E. Guest and D. Rutherfoord) while the vicar of Tutbury (the Rev. H. Bennett) undertook the duties of chaplain.  Most impressive was the singing of “O God, our help in ages past,” the first hymn sung outside.

The ceremony of the unveiling of the memorial was then performed by Major H. L. Newton, D.S.O.  Under the figure of Peace, a bronze tablet was shown, bearing the inscription, “In grateful memory of Tutbury men who gave their lives in their country’s defence, 1914-1918,” and under the figures of St. Michael and St. George were shown the tablets bearing the names of the fallen.  In an impressive manner the “Last Post” was sounded by Mr. Harry Bell, ex-sergeant K.R.R[5].

After the Bishop had dedicated the memorial, the reveille was sounded by Mr. Bell, followed by the singing of “The King of Love my Shpeherd {sic} is.”  From the text “God forbid that I should glory save in the cross of Jesus Christ.” his Lordship gave a splendid address, in which he spoke most touchingly of the noble sacrifice of the men.  He asked his hearers to ever remember their brave deeds, and spoke of the value of memorials to keep these men and their unselfish acts fresh in our memories.  The Hymn “They whose course is o’er” was then sung, and after the Bishop had pronounced the Benediction, the National Anthem was sung as a conclusion to the service.  The singing for the service was lead by the choir, under Mr. C. Owen, organist and choirmaster.

A large number of floral tributes was placed on the memorial at the conclusion and on the front was placed a large laurel wreath.  Amongst those who placed tributes were relatives and friends of the fallen.

We have not been able to find any record of the criteria for inclusion of men on the Memorial and some men do appear on more than one local War Memorial, showing the close nature of villages in this area.

The names appear to be recorded on the Memorial in order of the date of their death and no rank, unit or decorations are shown, symbolising the equality of sacrifice of all casualties.  This is in keeping with the edict from the first meeting of the (then) Imperial War Graves Commission in 1917 which decreed that ‘in the erection of memorials and graves there should be no distinction between officers and men’; further it was agreed that there should be ‘no distinction between creed and nationality’.  Both of these were radical departures from what had gone before.

[4] N.F.D and D.S and S.: The National Federation of Discharged and Demobilized Sailors and Soldiers was founded in January 1917 by London-based veterans opposed to the Review of Exceptions Act by which men invalided out of the armed forces could be re-conscripted.  It adopted the slogans “Every man once before any man twice”.  Senior military figures refused to attend its meetings, and the Federation’s politics became broadly liberal.  The Earl of Derby founded “Comrades of the Great War” as a right-wing alternative.  In 1920 the Federation invited the National Association of Discharged Sailors and Soldiers (NADSS), “Comrades of the Great War” and the Officers’ Association to a meeting to discuss merging, and this was achieved in 1921, establishing the Royal British Legion.  {Source:www.en.wikipedia.org/wiki/National_Federation_of_Discharged_and_Demobilized_Sailors_and_Soldiers }