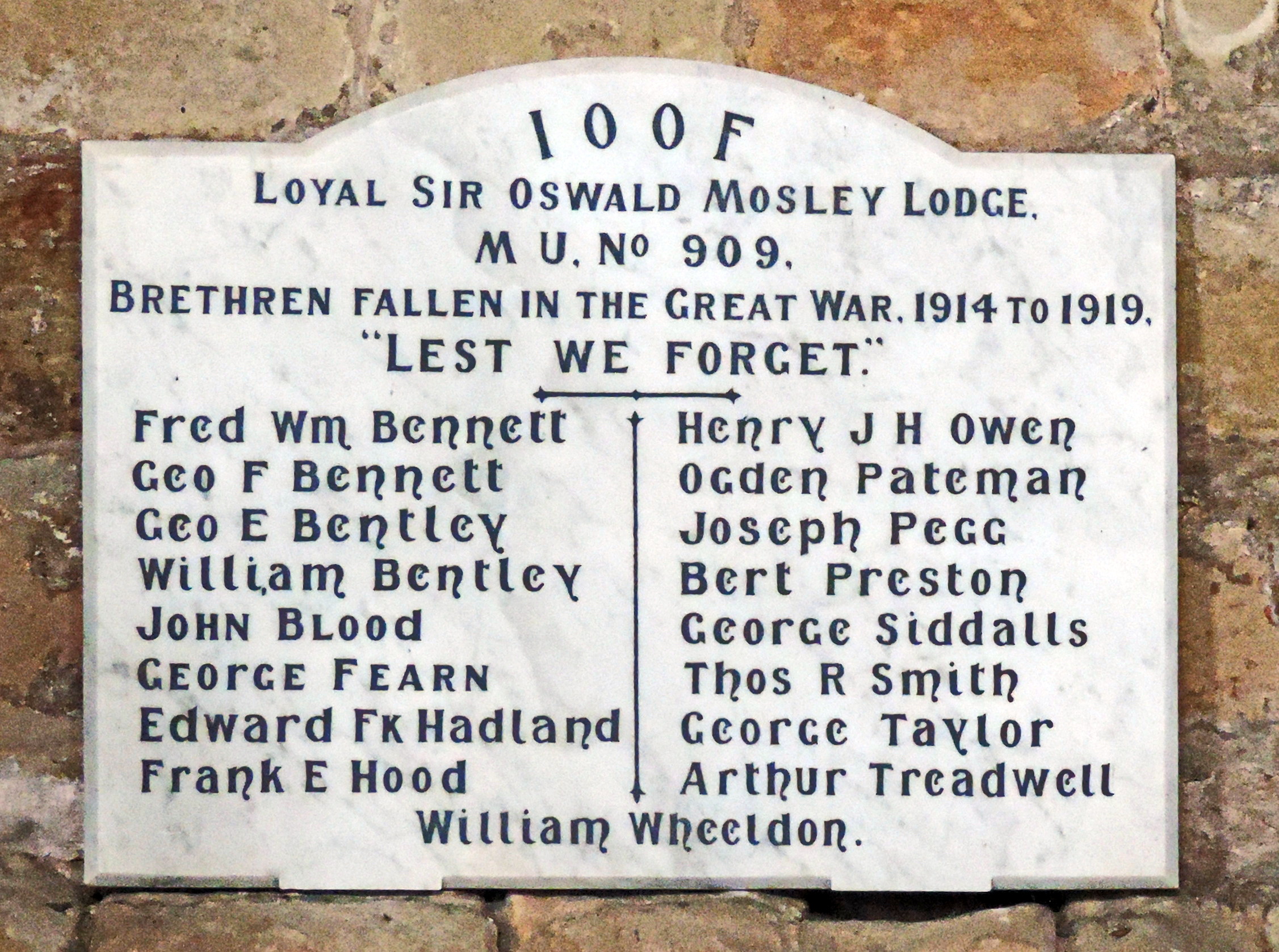 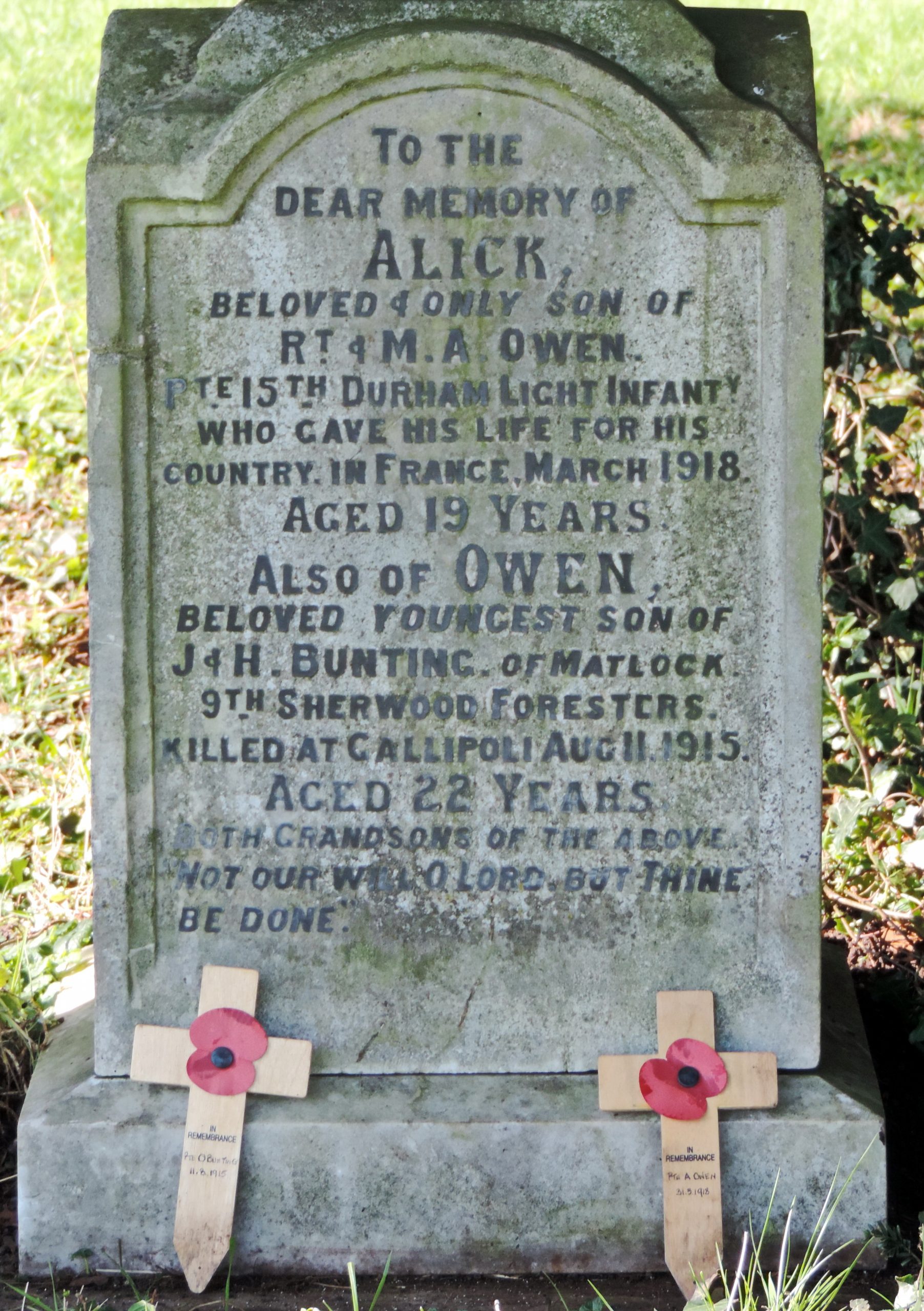 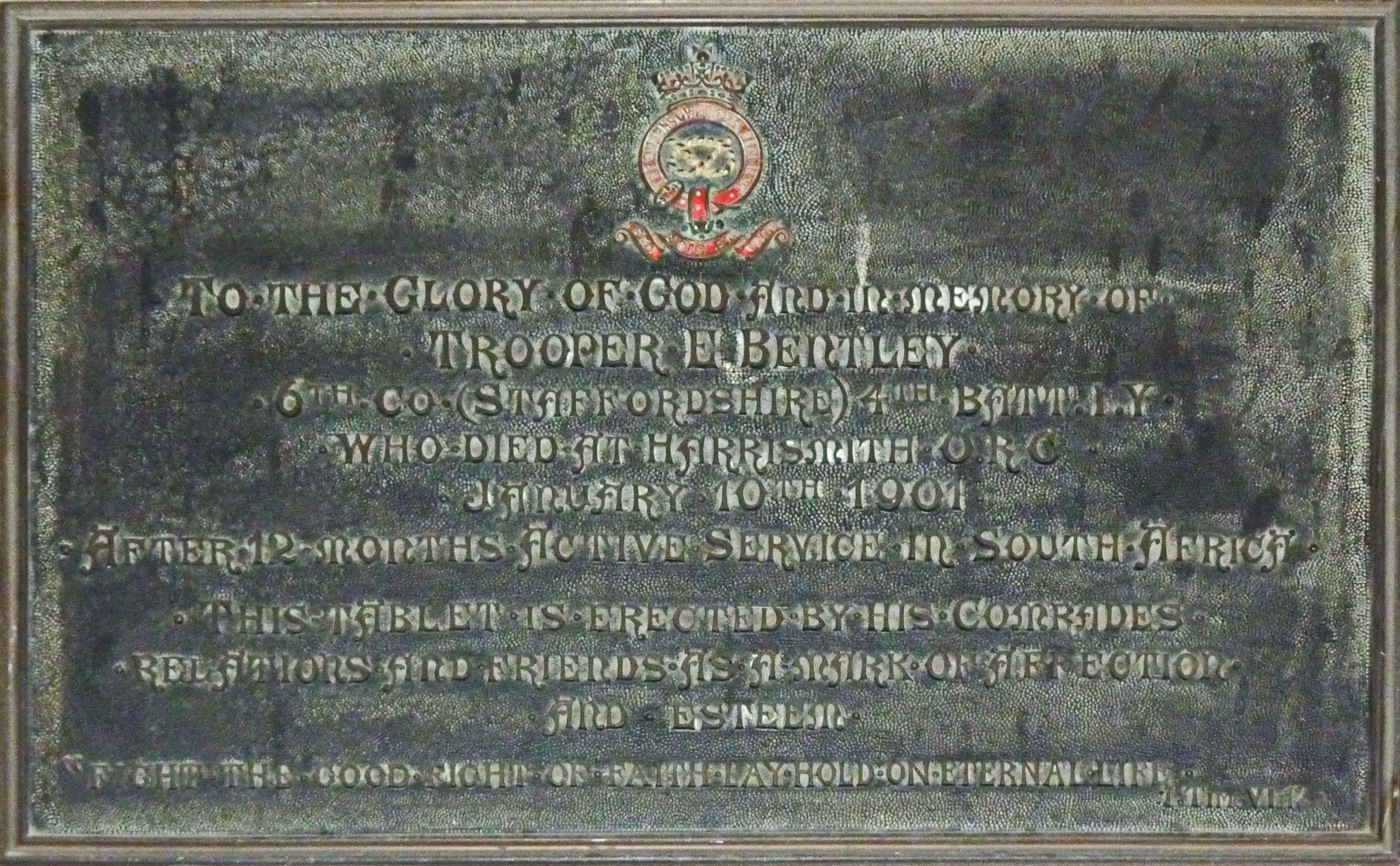 When this project started, we were aware of seven existing Memorials to War and two that were missing.  We have since come across several more Memorials, now up to a total of 20, two of which are missing.

A brief description of some of the Memorials is given below and further detail can be found for some by clicking on the memorial name.

When the book about the Memorials has been written, this section will be completed

We would be grateful for any further information on these memorials or indeed information about any memorial to the two world wars in the Tutbury area.  Two of the memorials described below are missing; one of them, the Druids, was a type of Memorial we had not come across before and it would be a very unusual Memorial if it were found.

On the wall next to the west door – one of those items that some people knew was there but had forgotten about.  While not within the original scope (the two World Wars) we have decided to include it as it relates directly to a family of the parish.

Condition: Appears good but in need of a clean?

Commemorating 17 Fallen, originally mounted on the wall of the IOOF meeting hall in Tutbury High Street.

Condition: the tablet currently in St. Mary’s church in the lady Chapel, below the other memorials to the two world wars.

(7) World War I Roll of Honour Board

In the Lady Chapel listing 333 men who served in WWI.  This appears to be paper enclosed in wood and glass frame.

Condition: Fair but exhibiting some signs of damp – to be examined by a conservator.

A plate on the organ in the Congregational Church “To the Glorious Dead”.

A framed memorial on the balcony in the Congregational Church listing 7 Fallen and 26 who served in WWI.

Condition: Thought to have been damaged during the restoration of the Congregational Church and the remains discarded.

Spotted in an advert for the sale of a private house that had formerly been the Congregational Sunday School.  Unclear what the relationship is between this item and the missing Item (7).

The “Who’d Have Thought it”, Lodge 1489 of the Birmingham Equalised Order of Druids (chaired by H.L. Newton, DSO) Tablet listing 6 Fallen, unveiled by the Vicar in February 1920.  It also lists a further 36 who served.  This Memorial was erected at the Castle Inn, Bridge Street.

Leather bound Roll of Honour for WWII, hand written in a script style.  It lists the 13 Fallen and the 273 who served.  It additionally lists 16 men from the parish who died in the Fauld explosion.  The book also contains words of condolence and a letter from the Tutbury Parish Welcome Home Fund.  Found in the safe at St. Mary’s in early 2013, currently on loan to the Tutbury War Memorials Committee for examination and documenting.

Condition: Very good – to be examined by a conservator.

The architectural drawing of the Stone Cross War Memorial, again paper enclosed in a wood and glass frame, resting on the floor of the lady Chapel; this is described at Memorial to the Fallen.